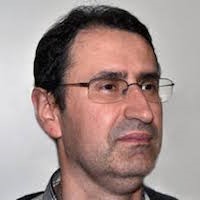 European Visions for Research Beyond the Early 5G Network

Rui L. Aguiar received his degree in telecommunication engineering in 1990 and his Ph.D. degree in electrical engineering in 2001 from the University of Aveiro. He is currently a Full Professor at the University of Aveiro, responsible for the networking area, and has been previously an adjunct professor at the INI, Carnegie Mellon University and a visiting Research Scholar at Universidade Federal de Uberlândia, Brazil. He is coordinating a research line nationwide in Instituto de Telecomunicações, on the area of Networks and Multimedia. He is the current Chair of the steering board of the Networld2020 ETP.His current research interests are centred on the implementation of advanced wireless networks and systems, with special emphasis on 5G networks and the Future Internet. He has more than 450 published papers in those areas, including standardization contributions to IEEE and IETF. He has served as technical and general chair of several conferences, from IEEE, ACM and IFIP, and is regularly invited for keynotes on 5G and Future Internet networks. He is senior member of IEEE, Portugal ComSoc Chapter Chair, and a member of ACM. He currently sits on the Advisory Board of several EU-projects and research units from several countries and on the editorial board of several journals.