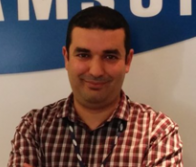 Dr. Belkacem Mouhouche is a Principal Standards Engineer at Samsung Research UK. He holds a Ph.D. degree in Signal Processing from Ecole Nationale Superieure des Telecoms (Telecom Paristech) in France. During his Ph.D. he worked on 3GPP third generation systems (UMTS). He later worked as a 3GPP standard Engineer following the development of HSDPA and LTE systems. He was also involved in FP7 European Project “End to End Efficiency” (E3) where he worked on cognitive radio in heterogeneous systems. His research interest are in the area of advanced techniques for the physical layer of future communication systems including MIMO, beamforming and coding applied to wireless systems. Dr. Mouhouche was also heavily involved in the development of the latest broadcast terrestrial standard ATSC3.0 and led the broadcast activity within the 5G-PPP project “Fantastic-5G”. Since 2017, Dr. Mouhouche has been working on the 5G-Xcast project, a H2020 project focused on point to multipoint applications, where he is the standardization manager and the technical manager.